“All great things must come to an end.”

As of Unofficial Trick or Treat 2015 re-release, Jmt Studios Events have officially come to an end. I would like to thank everyone who participated in our holiday events, whether it be our original Unofficial Egg Hunt series, or our top-hit Unofficial Trick or Treat series, we couldn’t have done it without you! Events were a huge part of Jmt Studios, racking up most of the revenue and visits out of all our games produced by our studio. In remembrance and respect to Jmt Studios Events, we will be doing an “Events In Review” post here today, so let’s get right into it.

The beginning, the very original: Unofficial Egg Hunt 2012. After ROBLOX’s fun and first “Egg Hunt” in 2012, I was inspired by the simple yet fun aspect of an “Egg Hunt”. So Jmt Studios, just being founded earlier that year, decided to create one. The game was not big at all, and took place on the official ROBLOX map “Chaos Canyon”. The game featured one obtainable badge because I did not have enough money to buy more badges, though the game featured many eggs to find. The eggs were static and did not move around or spawn, they were just hidden in places on the map. When you picked up an egg it would just place the egg on your head like a hat, with the exception of the Lonely Egg being hidden in a special place, giving you a badge upon touch. Halloween 2012: Orange VS Green was our first Halloween event at Jmt Studios. It was a paintball game on the 2006 Haunted Mansion level created by Shedletsky. The game featured one badge which you earned by joining the game. Here is a gameplay trailer created by gamegetter4, our first staff member: https://www.youtube.com/watch?v=TUZE5CAFBHE

Christmas 2012: Red VS Green was our first Christmas event game at Jmt Studios. Like Halloween 2012: Orange VS Green, it was a paintball game, but this time it was on the map “Santa’s Winter Stronghold” by ROBLOX.

Valentine’s Day 2014: Brick Battle was just a small game to try and make event games for other holidays. It was also released to occupy the long wait time between Christmas and Easter for the release of an Egg Hunt. The game took place on Crossroads, with a pink ambient. You were given basic weapons to fight other players.

Like last year, Unofficial Egg Hunt 2014 was a major improvement from the previous year. Unofficial Egg Hunt 2014 contained 23+ eggs to collect, the most we ever had. We also finally implemented a non-static spawning system. Eggs would have specific spawn points that they could appear at around the map. The game also featured an “Eggs Found” GUI for the first time. The eggs were very diverse, ranging from eggs that run away, eggs that kill you, and really hard to find eggs. The map took place on four ROBLOX made maps, all combined together into one. These maps included: Chaos Canyon, Crossroads, Glass Houses, and Haunted Mansion. This event was our most successful event at the time, racking over 2,000 visits. Blog post: What to expect in this year’s Easter 2014: Egg Hunt

Unofficial Trick or Treat 2014, our most successful event, and game in general, of Jmt Studios history. This was our first Trick or Treat game and it met a very positive response. Unofficial Trick or Treat 2014 hit the front page of the ROBLOX games page on the first day of release hitting up to 8,000+ concurrent players and racking up more than 10,000R$ in a couple hours. Unfortunately, it was wrongly shut down by ROBLOX because it apparently was trying to mimic an official ROBLOX event (it was not), and it used assets (decals) from ROBLOX’s The Witching Hour 2013 (which I found freely lying in Stickmasterluke’s decal inventory for me to use). Fellow Jmt Studios fans rioted in the comment section of the game, claiming that ROBLOX were jealous of the popularity of the game, but it would do no good. After many hard days of conversations between me and ROBLOX moderators and customer service, and changes to the game, ROBLOX lifted the closure on the game. The game’s objective was to adventure through BLOXville and trick or treat to collect candy, buy costumes, and complete quests. This was also the first time we implemented gamepasses into a Jmt Studios game. The game reached a total of 39,000 visits once it closed, a record yet to be bet. Blog post: Halloween 2014: Trick or Treat is Coming This October 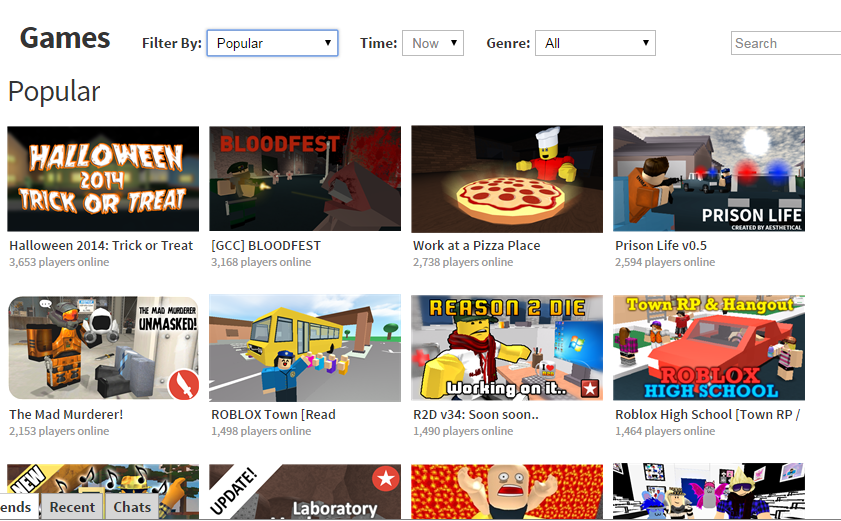 Christmas 2014: Gift Hunt was an unreleased event game by Jmt Studios. It was just like Christmas 2013: Gift Hunt, but was going to take place on a brand new map and new features. It was cancelled due to not having enough time to develop, as development started November 1st (due to Unofficial Trick or Treat 2014 taking up the time before that), and the game had to be released December 1st, so there was no time to develop the game. Assets and code from the game would later be implemented into Unofficial Egg Hunt 2015. Blog post: Christmas Gift Hunt 2014 is Coming This December

Unofficial Egg Hunt 2016, though unfinished, was a major improvement from our previous event games. It was the first time I had coded in a filtering enabled environment (filtering enabled is a ROBLOX feature that protects your game against some exploits, but is harder to script while enabled). The game also featured a new detailed cartoon art style for assets, that I think looked really nice and clean. For the first time ever, the game featured a true random egg spawning system. It consisted of “spawn zones” in parts of the map that the game would spawn eggs randomly inside. The game also had many break-out technologies that we will carry on to future projects to make the best games possible. Blog post: Introducing Jmt Studios’ Unofficial Egg Hunt 2016

Unofficial Trick or Treat 2015 re-release was an update and re-opening of the Unofficial Trick or Treat 2015. The update featured many things added that was promised and missing in the original game. The game was also completely converted to be filtering enabled compatible (we had to almost completely re-code the client scripts). Lots of code was changed to be more efficient (especially the saving/loading system). A new quest and a new landmark were added to the game as well, new costumes, and some new minor features.

Even though our event games are now gone, we are working hard to create a brand new innovative full game for Jmt Studios. We plan to announce/tease this game Q1 2017, so look out for that! You can join our ROBLOX group, follow us on Twitter, or check oftenly here to get up to date on the newest news.